Describing where we live is a little easier now that I have woven a piece about it. I’ve thought this place was beautiful from the first time Irvin took me to this little valley.  And I think it’s important to put some perspective on our location because it seems so ingrained in everything we do.  And it seems like a really good place to start this blog from.

So we live in a narrow little valley.  It looks like this on Google earth.

La Centinela is a narrow valley between two ridges.  La Centinela means, “the sentinel”, and it was named because these ridges were a good place for setting sentinels to watch for Indian raiders that were a threat when Chimayo was begun back in 1776. The town started in a defensive plaza, Plaza del Cerro,  just off to the left a ways from this image.  Plaza del Cerro is just over a mile down the road from us.  However, where we are at the low point in the valley we can’t really see north or south beyond those ridges.  What we do have a clear view of is to the east and the west.

The yellow line is State Road 76, which is the only way to get here by car, and the parallel white line above it is Arroyo del Oso. The arroyo once served as a road between Chimayo and Cordova.  Living next to an arroyo might not be a great idea, but in 30 years, the water has not come anywhere near our house.  We built a rock wall with a really deep foundation between us and the arroyo.  And we built the shop with a few extra feet of elevation.  Just in case.  In reality the arroyo is dry almost all of the time.  The green parts of the picture are basically the places where irrigation ditches feed water to.  As you can see, the irrigation ditch crosses the arroyo right by us.  I’ll show you that in a moment.

On a much grander scale, you can see that we live in a large valley, between the Sangre de Cristo mountains, in whose foothills our little valley nestles, and the Jemez Mountains.  The Rio Grande runs roughly in the middle of the valley.  The foothills of the Sangres are hilly.  But the Jemez mountains’ foothills, at least what we can see when looking down our little valley to the west, have eroded into mesas.  My knowledge of a geological explanation for this is seriously limited, but I assume that the  remains of a volcano in the Jemez, the caldera over there, has something to do with it.  A layer of volcanic material is probably not as easily eroded as our otherwise unprotected earth.

The overall idea for this piece was that it was going to follow a traditional Chimayo layout, with two stripes, a center design, and two smaller designs.  But I had lots of subdued colors, the kinds of colors we have in our landscape.  So I thought I would figure out a way to put local imagery into the stripes and into the designs.  The door to the shop faces west.  Our bedroom windows look to the west.  We are very tied to Los Alamos over there in the Jemez Mountains, with a lot of family history there.  The way the mesa tops fade into the mountains is something we have embedded into our memories.   So I’m afraid we are just sort of pointed at the western horizon.  I’m not sure exactly why, but that’s where this piece started.  With the Jemez mountains in the west.

The first design I decided to weave something more like, well, all of Northern New Mexico.  The little adobes are by an irrigated field with the pinon and juniper-covered foothills in the background.  And the “wing” elements are chiles, which I guess would be our favorite food around here.  And chile is what we are known for here in Chimayo.  This image reminds me of the imagery and literature of mid-century New Mexico.  It’s sort of cliched, but still really wonderful.

By the time I started on the center design I decided I should be working from photographs instead of making things up out of my head.  I figured it’d be easier that way.   So the first image I tried out was from right outside the shop.  It’s of the little road that goes into the orchard.  I even added  the little wall that guards the watergates. 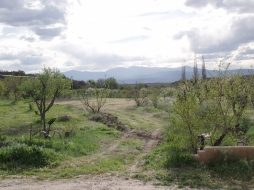 For the center design I had to weave two images side by side, at the same time.  Eventually it occurred to me to use the pictures I love to take from the top of the ridge behind us.  I chose to do one looking east and the other looking west.  East looks up towards the Sangres, and west looks down towards the Jemez.  But these focus a lot closer to home.  I was drawing from a few different photographs to compose the drawings.  And, of course, I had to simplify.  A lot. 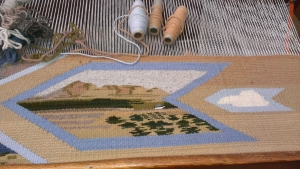 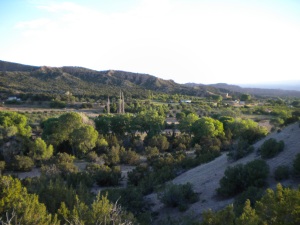 The top part of the center design is from one picture, the one I have here taken of the  Canada Ancha irrigation ditch.  Remember I mentioned that the ditch and the arroyo cross paths by our house?  Well this is where that happens.  Here is where it comes out of the culvert that goes under the arroyo.  Here it’s under some big cottonwood trees that keep it shaded.  Further down the ditch it sparkles in the sunshine 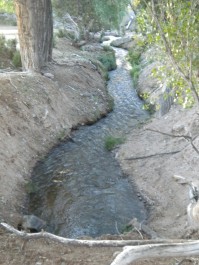 The next design is also from a photograph.  Irvin’s sister Pat has a whole herd of horses and donkeys that live on the land neighboring ours.  They can often be found waiting by the fenceline, watching for the people that come twice a day to bring them food.  The tractor that has been here since the 1960’s has spent a lot of time parked there by the fenceline.  This image caught the horse and the tractor practically side-by-side.  Behind them lies the arroyo, and the irrigation ditch picture above, is behind the arroyo.  I tried to leave the wintry nature of the picture behind in the weaving, so I tried to make it look more like sand than snow.  The burros loaded with firewood serve as “wing” elements here. 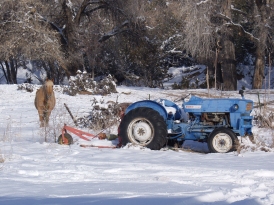 So after weaving all of this, I had to do another stripe.  Since I had started with the Jemez mountains, and had woven so much of the Centinela into the piece, I looked to the other side of the bigger valley we live in, the Sangre de Cristo mountains.  The problem is that we can’t really see those mountains much from our house.  So I had to work from more pictures.  Again, I did an amalgamation of images to weave the Sangres.  And the colors I had to work with for this part of the weaving, plus the fact that it was winter by the time I got to weaving this, meant they had to be snowy mountains.

So that’s it.  Our little valley from west to east and my little weaving from the bottom to the top.

Since it’s still here in the shop, it’s available for sale.  It needs an appreciative home.

Here is it’s page on our website: http://www.chimayoweavers.com/Merchant2/merchant.mvc?Screen=PROD&Store_Code=CW&Product_Code=Centinela&Category_Code=LT and in our Etsy store http://www.etsy.com/listing/176266125/centinela-southwestern-pictorial-48×72?ref=related-6